“Ami”, I said to myself on Wednesday, ”it is very, very terribly wrong, that you should refer to yourself by your online username and in the third person! You need a break. Too much Jemmaforum, too much Jenny dimples and Emma smiles ...

But then, there's the big fanmeetup, this weekend, you're on vacation, getting a house full of guests... You'll just go, party it up, meet some faces to names you've been hanging out with online, and hopefully, you'll manage to say thank you to Kasia and Lucy when you stand in front of them.

Because this you need to thank them for. If they would just go to work, read their lines and go home to collect their paycheck, you would not be so utterly smitten. And in springtime, too."

And maybe they have heard of their international fanbase, but they have no idea, that there are familiar names all over the place. That there's a community of us.

That became kind of apparent by Thursday, when almost all the youtube channels went down. What also became apparent, was, that the prematurely uploaded episodes were also watched in large part by Germans who were unwilling to pay or wait and crashed servers on blogs, flooded forums and even the Actresses' facebook pages, begging for links to the newest uploads.

Not our finest moment, but we kind of drew together after the shock, and tried to block and suppress the illegal down and uploads, that sprang up anew, and the distribution of them. It hurts the show, if people rip it off of the pay per view channel and put it up on yt and HaH looses viewers, of which it doesn't boast too many. It hurts the international fanbase if their sources are taken down, just because a few Germans couldn't be patient or generous.

Hand aufs Herz, actually issued a statement, in which it acknowledged the international Jemma fans, expressed their gratitude, and asked their patience in finding a solution that would work for everybody. Patience.

In the middle of this hullabaloo and silence, trains started arriving on Friday evening, and in them were friends, waiting to be made.

We met up at a Berlin, center of town, tourist trap, that was big enough to hold a reservation for 30. Cancun, the “Mexican Bar and Restaurant”.

At the huge table behind us were a group of models, I mean pirates, I mean...bachelorettes, who looked like models and were each and everyone dressed up as pirates. They left early, but did prove to be a good omen of the things to come.

As these things go, we chatted, got to know each other, watched the newest Hand aufs Herz ep on a netbook in a corner of Potsdamer Platz, went to bed, and met up the next day.

There were different subgroups and people and agegroups, and what not, but we managed to always stay in touch, somehow.

The STAG on Stage

Anyways, the actual event started out with a concert. And not just any conncert, but it was “S.T. AG” performing! The first song had Selina Müller (Luzi) Franciska Friede (Sophie), Kasia and Lucy on stage. “Be Mine” in a faster, rockier version. And holy microphone, batman!

Kasia stepped up on stage with a brandnew rockstar hairdo, and let me tell you: “You thought your heart was firmly lodged in Lucy Scherer's eyes and dimples?”

Think again, it was shook up, severely, by Kasia, who was sweet and fun and rock'n roll. But ah, Lucy was the same…and… You don't need to choose, and your heart remains happily in your chest, with no rip out desires.

About halfway through the song, they must have realized, that they had a huge crowd of fans...and they started…flirting. Remember, how they have mad chemistry?

Now, imagine, them singing “Be Mine” in its rock version while deeply looking into each other's eyes, and dancing up against each other, while the completely forgotten Franci and Selina sing. And then Kasia murmuring in a reaaaally low voice: “ I saw you at the train station, you had your arms around her shoulders.”

A duet? A sexy, and sweet and very emotional duet? Look into those eyes again...with the hair, and the voices, and the rocking out. Yes, you have Asthma? Here's your inhaler.

Things got really intense, and Kasia had tears in her eyes before they hugged it out at the end of the song.

Wow! They performed another two songs together with “STAG” where the focus wasn't as strongly on them, but which was really sweet anyways. Just the many ways they kept looking at each other! Lucy looked proudly at Kasia when she performed something really taxing, Kasia would just look and smile at her, and it was just really sweet and affectionate. 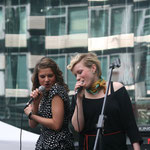 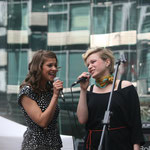 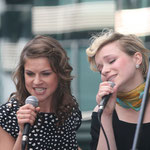 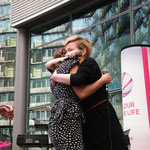 After the show, there was the presscall, where some of our tall amazons managed to get a few pictures over the crowd, while the rest of us, tried to gather our bearings, our friends, and set out to find the end of the line for the autographs. It was huge. But we got into it anyways, unsure if we'd ever even get to see our two heroines. 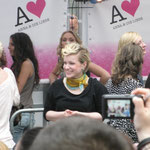 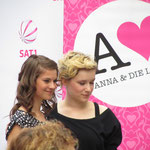 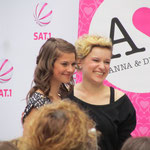 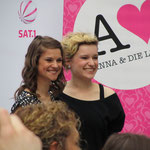 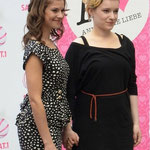 Since there were so many of us, in different groups, some people would hold the place in line, while others flitted about, hanging with the others, getting coffee, or just watching Lucy and Kasia sign autgraphs from behind the barrister. They'd smile back and wave, and we got a bucketload of pictures, which just go to show how absolutely sweet and awesome they were with their innumerable fans!

Suddenly, and mysteriously, we stood in front of Kasia and Lucy! My friend from Zurich, who suffers from a severe Lucy Scherer affliction said Hi! And told them about where she comes from, and then my chance came, and… I can talk really fast. Especially when security is telling me to keep moving it along.

So, you know, I kind of spluttered on about how the “international fan thing”, is actually this bog online community, all of these people who just ache to see a good love story, and how's there's always a bullet, or an ex-boyfriend or whatever, and how to see them and their storyline is just filling this big gap and is such a blessing and that we are so grateful for it.

Uh, I almost cried, they almost did, too, and I basically held up my phone, and said: ”Now, a message for your international fans. Everyone who can't be here today!”

And Kasia started speaking English! The security kept rushing us, and if there wouldn't have been this big table in front of them I would've just hugged them, I am afraid. They were so sweet. And I am so sorry, for having put them on the spot so! But don't they rock?

Anyways, I kind of stumbled out of the “Autograph signing street” of which Kasia and Lucy were only the beginning, and guess what? The only autographs I got were ones from Franciska Friede, whom I thanked for supporting us, and the guy who plays Ronnie, cause he was kind of flirtforcing one on me. While telling me of his personal undying Jemma devotion. Yeah, weird. But nice, in a way.

I just don't know what to do with his autograph. If I put it on the fridge with the others, my family and friends will tease me endlessly about being straight. I didn't get any from Kasia and Lucy...cause well, I already had some from the flashmob, and I completely blanked out and totally forgot.

What happened, though, was this: They did not only show the episode, but two clips ahead of that episode, outling the main storylines. The one right before the ep was of Ben and Bea the ill fated student/teacher couple, about five minutes of them. And before that - a Jemma compilation!

Like seriously! They did an effin Jemma storyline fanvid set to “their” music, with fade ins and outs. On the big screen! In front of 800 people! 12 Minutes! It was so beautifully done, and just so spot on, and such a surprise, I think, I would have fainted, if I hadn't been sitting already. Goodness, gracious!

We cheered at the appropiate parts (the kissing), and sighed, and hooted. After the clips, and before the eps, the actors came on stage, all of them.

And Lucy and Kasia were still wearing the fanmade Jemmashirts some of us had given to them. Great!

We sat throught the highlight episodes, which you will have seen already, the one with the car crash (wasn't that effin epic to watch on such a big screen! But not nearly as good as the kiss during the school strike). And we stumbled out of the movie theater at about half to seven. Fanday was officially over...

However, there still was to be a runway show at the shopping mall we had fashmobbed a few weeks prior, so we got on the bus and train, and did some event hopping to Alexanderplatz.

You know, I NEVER frequent that place, and we just figured, that it would be where the flashmob was, which luckily was the case. But I wouldn't have guessed, since we plowed through sportswear and hiking gear stuff. I mean, a runway show? It WAS the gayest thing ever!

Featuring assortments from the upcoming women's soocer worldcup (I.kid.you.not) Hiking gear and Quicksilver fashion. The professional models did the kinkier...I mean sportier stuff, while the Hand aufs Herz Team mainly strutted Quciksilver. Actually, they didn't strut, but partied it up on stage.

Lucy, as expected danced it up, with her “Ronnie” stage partner, featuring hotpants, and a blouse that covered a tank top. And Kasia...she basically exploded on stage with merriment and rock'n roll. And she was wearing a flannell shirt… Franciska was her female stage partner, and did they freak it up!

The music was super danceable, and it was a partying fadeout of the day. Wait. It would have been a fade out of the day, if they wouldn't have done repeat of the whole show! Double the party!

Afterwards, they distributed some more autographs, etc., took some pics, and some of the girls were allowed backstage for some more pics. By that time, it was after nine, and all of us basically crawled home. Can't image how spent the actresses must have felt, but they were the impersonification of lovable- and sweetness.

So, now, here I sit, the second week of my vacation, and I am still suffering from Jemmaitis with a superinfection of Kasilucitis. I do wonder what I am supposed to tell people who'll ask me where I went? Heaven? The Sony Center? Seriously?

It was freakishly awesome, and I hope, that they'll find a solution soon, that will allow everyone to watch everything with a good conscience and no more troubles. Hope you kind of managed to enjoy the day second hand!

Oh, and on a side note, I only ever heard the word Lesbian mentioned once. The no clue people behind us in line were “Who is this Jemma?” the other ”Oh, it's the Lesbian couple they have on the show now.”

Mission "Searching Jemma" wasn't a Mission Impossible: We were looking for fun and lots of autographs but what we found were new crazy friends, the feeling of being 14 again (with the knowledge never to have act like this at the teenager age) and cuteness overloaded with Kasia and Lucy....and a LOT of fun... Hope you can enjoy the day as much as we did: This is for you guys all over the world