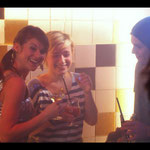 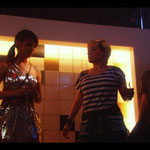 Ronnie challenges Ben to do another race, but Ben declines. Instead, plagued by regret, he decides to visit Timo in the hospital. There he gets to know about Timo being paraplegic causing his guilty feelings to start suffocating him.

Meanwhile Caro is determined to become Frank's assistant. She shows up at 'Raumzeit Records' to apply for a job. When his current assistant leaves her desk out of health reasons Caro doesn't waste a second to take over.

Luzi is doing a record with Frank, who's amazed by her. She had to leave Timo alone in the hospital to be at the meeting, when she comes back to the hospital and gets to know about Timo's situation she doesn't want to believe it and thinks it's her fault. It doesn't help that Timo, ridden by sorrow, tells her so, too. If Luzi hadn't told him that there was someone else, he never would have gotten up from his bed and left the hospital. Luzi is ready to dump Ben and get back together with Timo to help him, but he rejects her, not wanting to be taken back out of pity.